Pupils from Cilffriw Primary School in Neath Port Talbot helped to celebrate the launch of a new 20mph speed restriction in the village today (March 16) as part of a Welsh Government trial to reduce the national speed limit from 30mph to 20mph in residential areas. 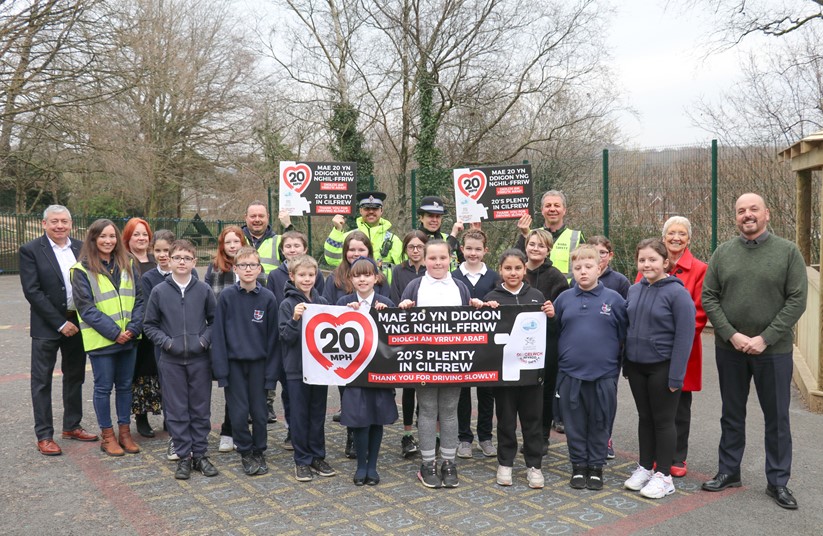 Cilfrew Village is one of eight areas chosen to take part in the pilot scheme following the Welsh Government’s announcement in 2019 that 20mph should be the default speed limit on all residential roads in Wales. The 20mph area will encompass all of Cilfrew Village plus a section of the main road (A4230) around Llangatwg Community School, starting at the A465 roundabout and finishing just before the junction of Underwood Road.

It comes as overwhelming evidence shows that lower speeds result in fewer collisions and a reduced severity of injuries. In fact, pedestrians are five times more likely to be killed if hit by 30mph compared to 20mph. As well as the safety benefits, 20mph zones improve air quality, reduce noise pollution and can result in healthier lifestyles by encouraging more walking and cycling in neighbourhoods which are safer and shared more equally between different road users.

Pupils from all age ranges at the school took part in the launch event alongside their headmaster, Mark Quinn, Councillor Doreen Jones and Neath Port Talbot Council’s Road Safety Manager, Joy Smith. They showed how they had been preparing for the changes by taking part in a cycling awareness lesson in the school yard and by displaying their ‘Twenty’s Plenty’ drawings, messages and poems explaining why they agree with a 20mph limit in their village.

Cllr Latham, Leader of Neath Port Talbot Council, said: “We’re proud to be one of the first areas in Wales to roll out a 20mph speed restriction and we’re delighted to have the help of the children at Cilffriw Primary School to help us launch it - they really have taken the ‘Twenty’s Plenty’ message on board. Introducing the 20mph limit supports Neath Port Talbot Council’s vision, values and well-being objectives. By reducing the speed of our residential streets, we can create healthier lifestyles through neighbourhoods which encourage walking and cycling, and which claim the streets for children to play. Of course, it will also reduce pollution in the area and, most importantly, significantly reduce the chances of being involved in a road collision. We firmly believe this will have a very positive impact on overall wellbeing and on the environment, creating stronger, friendlier and happier neighbourhoods to live in.”

Year 6 pupils have also written a letter to their community urging that ‘Twenty’s Plenty’ which will be included in a Neath Port Talbot Council newsletter to local residents providing more information. The council’s road safety team will continue to work closely with schools in the area to promote walking and cycling with pupils being offered cycling and pedestrian skills.

Headteacher of Cilffriw Primary School, Mark Quinn, said: “We’re delighted to see a 20mph speed limit being rolled out in Cilfrew. We have been working hard with the pupils to prepare them for the change and they all agree that they will now feel much safer in their local neighbourhood. Neath Port Talbot Council has worked very closely with us on this, and we’re very grateful for all the work that they’ve put in to introduce the scheme which we firmly believe will significantly enhance our local community.”

Welsh Government Deputy Minister for Climate Change with responsibility for Transport, Lee Waters, said: “Cilfrew is the latest of our 20mph pilots to go live and I am pleased to have the support of local residents including schoolchildren in making this change.

“Making 20mph the default speed limit on busy pedestrian streets and in residential areas across Wales is a bold step that will bring significant benefits. Not only does it save lives, but it also helps to make our streets a safer and more welcoming place for cyclists and pedestrians, has a positive outcome for our physical and mental wellbeing and with fewer vehicles on the road, helps create a positive impact on the environment.”

The other pilot areas are St Dogmaels in Pembrokeshire, Abergavenny, Central North Cardiff, Severnside in Monmouthshire, Buckley in Flintshire, Llanelli North in Carmarthenshire, and St Brides Major in the Vale of Glamorgan. If Welsh Government goes ahead with the proposal to reduce the default speed limit to 20mph, Wales will become the first country in the UK to bring in the change. The pilot scheme will gather data and develop a best practice approach before the proposed full rollout in 2023.