A ceremony to mark the Proclamation of His Majesty King Charles III’s accession to the throne following the death of Her Majesty Queen Elizabeth II was held in Neath Port Talbot on Sunday (11th September 2022). 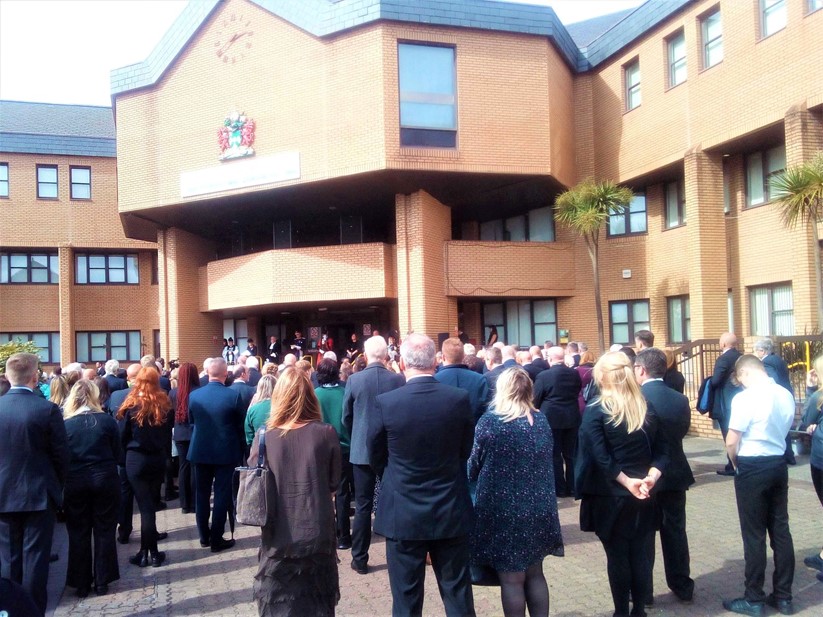 The Proclamation was read out publicly in Welsh and English on the steps of Port Talbot Civic Centre.

Although the heir to the throne automatically becomes monarch on the death of the sovereign, the accession proclamations are the formal announcements of the succession at national and county levels.

This is an ancient ceremony and one that was repeated across the United Kingdom at the weekend according to custom.

A large crowd gathered to watch the ceremony which included an impeccably observed two minute silence, a piper’s lament and the singing of national anthems.

Flags were flown at full-mast at the civic centres in Neath and Port Talbot from 11am on Saturday September 10, to mark the Proclamation of the new Sovereign. They returned to half-mast after the local proclamation ceremony and will remain so until 8am on Tuesday, the day following HM Queen Elizabeth II’s funeral.

Guests and members of the public were welcomed to the ceremony by the Chief Executive of Neath Port Talbot Council, Karen Jones.

The Lord Lieutenant of West Glamorgan Mrs Fleet said at the ceremony: “Our sadness at this time is shared by people across the world”.

She added that people were now “remembering with great affection and gratitude the lifetime of service given by our longest serving monarch.”